The Mickey Rourke love continues with this episode on Barbet Schroeder's 1987 film Barfly. Scripted by author Charles Bukowski Barfly follows drunk poet Henry Chinaski (Rourke) as he traverses the bars, alleys, and roominghouses of L.A.'s Skid Row. Along the way he meets kindred spirit Wanda (Faye Dunaway) and they love and fight their way through life's ups and downs. Barfly is a surprisingly warm and humorous tale about those living on the outskirts of society.

Heather Drain and Anthony King join me to discuss the film, Bukowski's writing, problematic artists, and the beauty of art.

And a picture of Red Stodolsky in front of the Baroque Book Store: 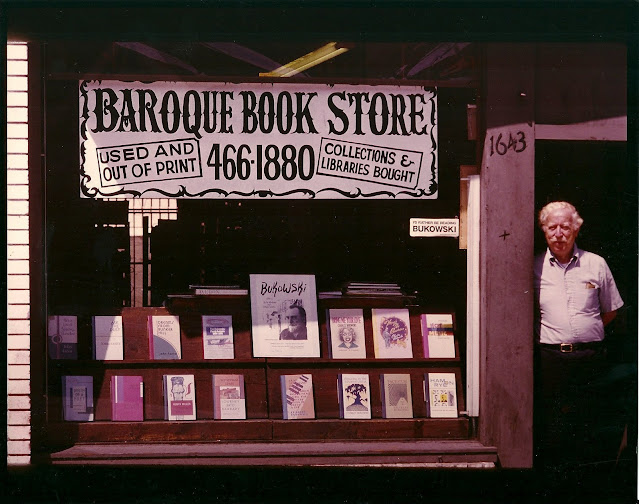 It's been a long time coming (two and a half years, if anyone's counting) but the Mickey Rourke Love-Fest is finally here. 1987 was a big year for Rourke with three films hitting the big screen between April and October. Two of which happen to be HUGE favorites of mine, including this one.

On this episode I am joined by Mike White and Cullen Gallagher to discuss Alan Parker's adaptation of the 1978 novel Falling Angel by William Hjortsberg. A combination of horror and noir Angel Heart (1987) follows Harry Angel (Rourke) as he tries to track down the one-time famous crooner Johnny Favorite. Angel's client Louis Cyphre (Robert DeNiro) means to make good on the "contract" he made with Johnny before he was drafted and ended up wounded and shell-shocked. The film also stars Lisa Bonet as Epiphany Proudfoot, Charlotte Rampling as Margaret Krusemark, Dann Florek as Herman Winesap, Michael Higgins as Dr, Fowler, and Pruitt Taylor Vince as Det. Deimos.

You can check out the Fangoria article here (starts on page 26) to see some pictures of the deleted scenes discussed in the episode.