Like so many people my age I often feel the strong pull of nostalgia for the "simpler" times of my youth. However, I also love the modern world. Have I mentioned how much I love being able to stream hundreds upon hundreds of movies at the push of a button? Well, I do! Nostalgia for me is mostly tied to things; toys I once had (or didn't, but really wanted), comic books, and of course, movies. This little tale is about one particular comic that has buzzed around the back of my brain for at least 35 years, and how nostalgia and modern technology can work together.

We used to take an annual summer trip to Portland, OR to visit my mother's family who all lived/live up there. It's a bit of a drive, about 750 miles, and when my sister and I were young, the trip would get broken up over a couple days. Sometimes we would stay in Stockton with my dad's brother's family, and other times we would stay overnight at a motel further north in California.

On this particular trip (I honestly have no recollection of how old I was, but I'm guessing younger than 12) I had brought along some comics to read. Or they were possibly purchased in the town where we had stopped for the night. Either way, this story is about one horror comic that I recall reading in the car and motel room on that trip. Horror comics were not my thing at the time--I stuck mainly to Marvel Super-Heroes--maybe that's why it left such an impression on me. Here's where my memory has surely conflated things, but from what I recall one story was about someone getting buried alive, or possibly grave-robbing, and one was about a vampire. A single image from the vampire story is the ONE thing that really stuck with me for all these years: the vampire was lying in a coffin, extremely withered, with a large, wooden stake in his heart. And he wore a blue suit, which I think stood out since I was used to vampires being dressed in black.

As people are wont to do when they "grow up" I got rid of all my comics and most of my toys at some point (or more accurately my MOM did!) and didn't think too much about them until, well, I did. When I did think about this comic from time to time, I never really sought it out. I mean, where does one even start, especially pre-internet? But last year I got a bee in my bonnet and decided to go all Three Investigators* on this thing. I quickly realized that searching for: A Horror Comic Most Likely By Marvel From The Mid To Late Seventies wasn't going to cut it. For one thing, I really had NO idea whether the comic was actually a Marvel title, whether I bought it on the trip, or if it was a hand-me-down from one of my neighbors who had grown out of comics (which meant it could have been from EARLIER in the decade). After some investigating I realized just how many horror titles there were in the Seventies! I hit a couple message boards with the memories I had but to no avail. I thought I had it nailed down to an issue of The Tomb of Darkness: a Marvel title, with a vampire on the cover and story descriptions that closely matched what I remembered, but I never did buy a copy. I just wasn't convinced this was the right book.


That brings us to this past July when I started mulling over the branding of Wake Up Heavy. I was originally looking at sci-fi and horror books for inspiration, then moved to horror comics. During these searches that one old comic from that long ago trip to Portland crept back into my grey matter. I thought, "Well, maybe I'll stumble on a cover image that will light a spark in the ol' noodle factory." Really though, it just made me realize again HOW MANY HORROR TITLES THERE WERE. Eeerie, Creepy, The House of Secrets, Unexpected, The House of Mystery, Dead of Night, Beware, The Witching Hour, Vault of Evil, Vault of Horror, The Tomb of Darkness, The Tomb of Dracula, Chamber of Chills, etc., ad infinitum. I searched the cover galleries of most of those titles, and more, with no luck.

Last week I was scrolling through my Instagram feed on my phone and I saw an interesting image of a little custom made toy of a skeleton with a cape. Now my feed is full of toy images because it's something I collect, but it was the card-back that struck my noggin. It was of issue #50 of the DC horror title Ghosts (not a title I had searched for before) and it looked vaguely familiar. My recollector was in high gear when I clicked on the image and swiped to see the second picture.

And then my brain lost it, I HAD THIS COMIC! I wasn't sure it was the comic, because, although I recognized the panels, I didn't remember this being one of the stories from that comic. Still, I knew I had this comic, so maybe the one I was looking for was a different issue of Ghosts? I had a lead! I searched through the comic book database again, but nothing was striking a chord. I thought I'd go back to Instagram and peruse some posts there. With the hashtag #dcghosts and fingers crossed I hit SEARCH. And there it was, about three posts in, panels from that comic!!


But there was no issue number listed! I commented, "Can I ask you what issue this is? I think this is one I’ve been searching for since I was a kid!" The answer back: Issue #50! The same one!

I hit my local comic shop, and although they had a few issues of Ghosts, they didn't have #50. eBay was next, where I found a nicely priced copy. So here we are, 35 or more years later and I have a second copy now in hand. What a strange time in which we live!

The story I remembered was, "Most Fearful Villain of the Supernatural." And here are the images that had burned themselves into my brain: 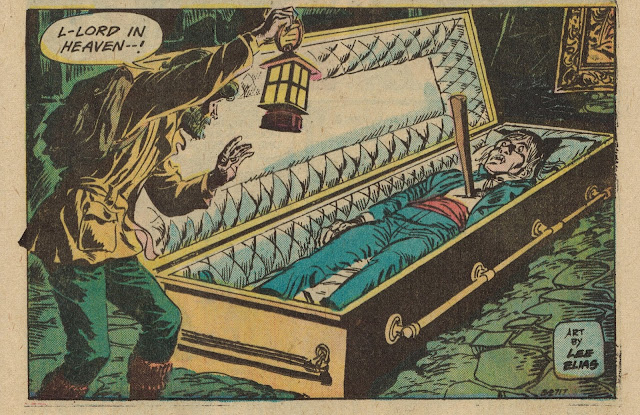 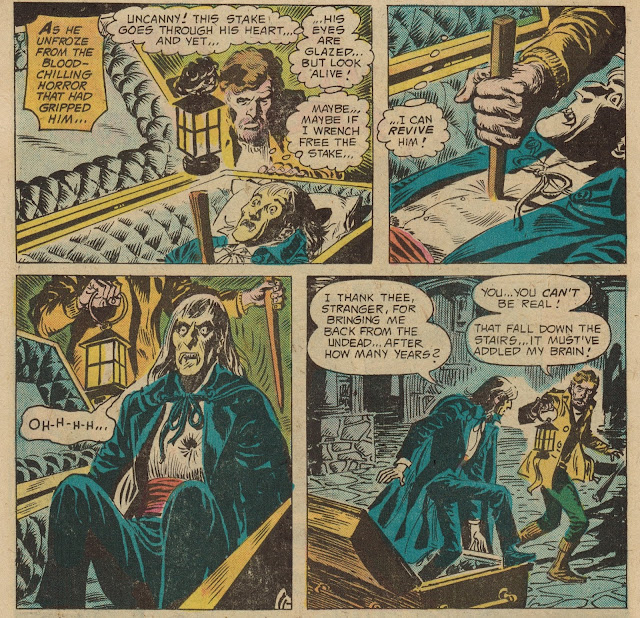 Reading through the comic I was struck by just how many images hit my memory receptors in this story and in, "Home is Where the Grave Is." I was wrong about the buried alive/grave robbing story, although there is mention of grave robbing in the vampire tale. Maybe that was it, or maybe that's actually in the issue of The Tomb of Darkness I posted above?? Or maybe something totally different. I don't really want to try and track down another 40 year-old comic! A little trivia, the vampire story is supposedly a true-tale about Bram Stoker's inspiration for Dracula.

Big thanks go out to Instagram members @rm_renfield, for posting the panels of the vampire from that issue, and @retrogimmicktoys, who created the Ghosts Skeleton figure that helped me track down this comic. 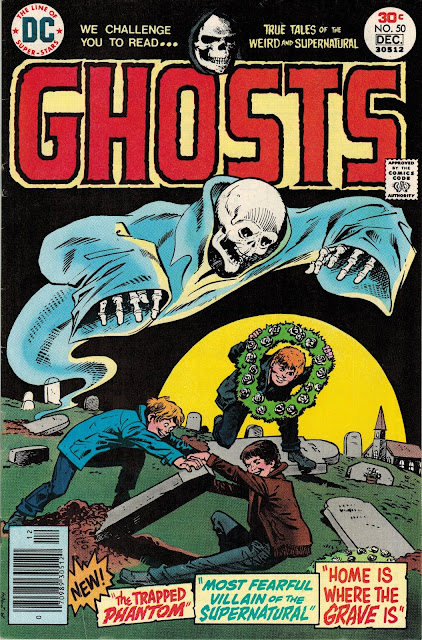 *That's a whole other story. I loved that series of books!